I was diagnosed with asthma when I was in my teens.  asthma is a condition which has been in my family for generations.  I cannot say that I lived the perfect lifestyle or always looked after myself. I lived the typical lifestyle of a young person at that stage.  I also wasn’t the ideal patient who used his reliever/preventer as instructed.

Along with breathing difficulties (shortness of breath, wheezing, coughing, and tightness in the chest) there were other ide effects to my asthma.  I suffered from dermatitis and was regularly very tired when I was younger.  The dermatitis was so bad on my legs that I used to wake during the night  and they were bleeding and had stuck to the bed clothes. The frequent tiredness I put down to laziness.

I was hospitalised on numerous occasions over the years as my asthma worsened .  Steriods were regularly prescribed to me.  I gave up certain sports and visited many alternative healing options.  I spent quiet a lot of money looking for the quick fix solution.  On one such expensive occasion I was told after allergy testing I was allergic to ‘dust’.  My asthma was so bad my local doctor  told me not to queue when I go to the surgery – that people like me can die from asthma.

As my asthmatic episodes escalated I ended up in ICU on a number of occasions.  On one occasion I remember waking up in ICU in Portiuncla Hospital in Ballinasloe to see my parents and the priest at my bedside.  I was so exhausted at the time I wasn’t able to process what was actually happening.

In recent years, on one occasion,  when in hospital my wife was told by a doctor – he may not have asthma…..and then rushed me to ICU.  When in ICU I got MRSA.  On that same visit I was told that I had the lungs of a sixty year old man and that I had to accept it.  It was at this stage that my wife insisted that I get referred to a specialist in UCHG that she had heard of.

This was the turning point in my voyage with asthma.  I attended the Respiratory Clinic and new medication was introduced.  I started taking a drug called Singulair, a Steroid Inhaler, Neoclarityn along with other inhalers. A treatment plan which worked for me.

My asthma became very controlled.  In recent years I joined Fit for Life and was able to run the distance between two telegraph poles and did the Couch to 5k with Athenry AC. It was not pretty at the start but I began to run 2-3 times a week.  I started swimming which helped with lung capacity and control breathing. 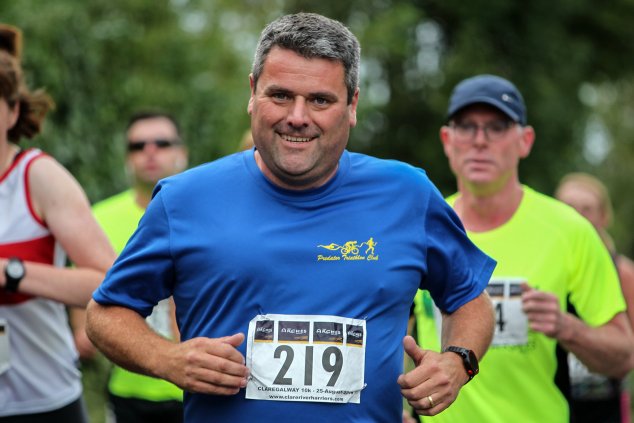 As with all asthmatics I have good and bad asthma days.  Certain things will escalate it and certain conditions effect me but I accept them and continue on.  I see asthma as a ‘condition’ as opposed to an ‘illness’.  There are certain days I go out running and know after 500 yards that its not happening today and walk home.  I recent years I have joined the Predator Triathlon Club and Athenry AC.

This month (October 2018) I hope to run the Dublin Marathon (slowly).  I am quiet proud of where I am today,  but also realise that it is important not to let asthma stop you reaching your goals as it is something that can be managed with the right care plan.